At 22 I was feeling restless and a little lost. I was studying biochemistry at university and in a long-term relationship with a man I thought I loved but deep down I felt trapped. I decided to break up with my boyfriend and over the university summer break to take some time to explore what life was like without the responsibilities and restrictions of a relationship. I made a list of all the things that I wanted to try that I been unable or unwilling to do in the past. The list was quite eclectic and adventurous to say the least. From sexual curiosities, to experimenting with drugs, getting a tattoo, and even finding out whether or not God was actually real, I wrote it all down.

Within a matter of weeks I had explored most things on the list. I was definitely committed! But despite my best efforts to find fun and freedom through risky behaviours and partying the ‘list experiment’ left me feeling empty and quite disappointed. There was only one thing I had left to explore, ‘Is God real?’

One Friday afternoon early into first session back at uni I was having a coffee with Katie, one of my friends from class. I had heard rumours that she had become a Christian over the summer break. I was curious as to whether it had changed her. As we were having a general catch up one of Katie’s friends from church, Crystal came over to join us. She began talking about her own relationship with God in the most normal and natural way, like God was an actual person. I was captivated, a mixture of confusion, amazement and deepening curiosity. There was something about her that made me want what she had. ‘What if God is actually real?’

I went home that night and remembered something that Crystal had said during our conversation. ‘If you ask God to reveal Himself to you, He will’. I lay on my bed and with no real idea of what the appropriate prayer protocol was, I clasped my hands together and said out loud ‘God if you are real, please show yourself to me’. Within a few moments I fell asleep. It was the longest, deepest sleep that I had had in months. I woke up feeling so rested and at peace. I called Katie ’I want to come to church with you on Sunday’.

Much of that first service is a blur but I do remember feeling overwhelmed almost as soon as I walked in. When everyone started singing I stood there mouthing the words to a song that I had never heard before. Within minutes I was sobbing uncontrollably. After a while I heard the minister say ‘If you are tired of doing things on your own you can ask Jesus to step in, let him have control of your life.’ In that moment I realised two things, God is real and I need Him. I knew I needed to say yes to the invitation that was being offered. It was crazy, there was still so much I didn’t understand but I had an incredible sense of peace. I knew I had made the right decision but I still didn’t fully understand the decision. That moment was just the beginning of what has been an amazing and at times challenging God adventure.

The church I walked into with Katie 11 years ago became the first of what I would come to know as an extension of God’s family. My husband and I nurtured our young relationship there, we welcomed our two children into the world there, and it was ultimately where I established the foundations of a faith that is continuing to grow each day. We are now in a new city, in a whole new church and God’s love and desire for relationship with me continues to captivate my heart, and bring peace to my soul. 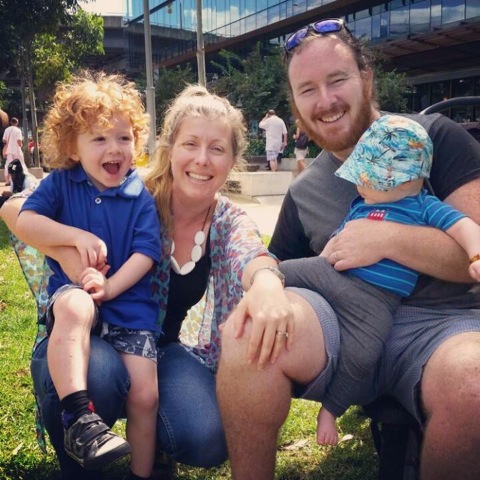