Next PostAbused and Silent to Finding Her Voice – Rebecca’s Story

She Is Fighting For Her Daughter – Sandra’s Story

The signs started to reveal themselves in January 2011. To the untrained eye, everything would have looked the same but for me, her Mama, who knew her better than anyone, I could see things weren’t right. The dancing in the kitchen after dinner stopped. Her nails were no longer painted in bright shiny colours. Photography ceased as did her desire to learn to drive or do anything she used to consider fun. 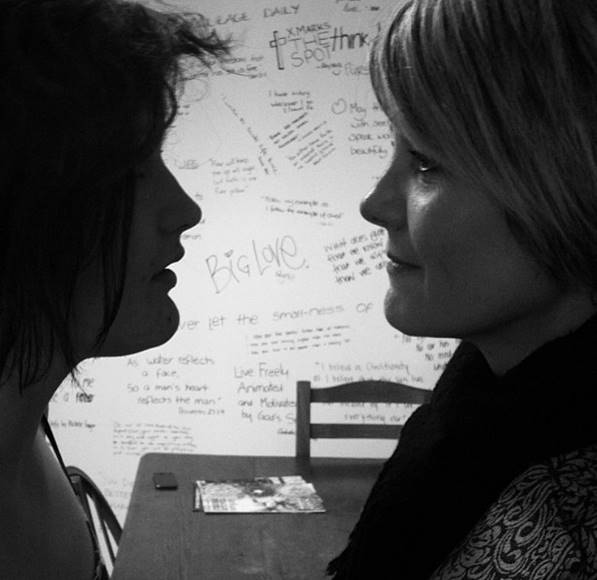 My quests for answers by asking her how she was, availed little. She was aching and so was I as I watched our bright sunshiny girl disappear. Serious abdomen pain became her daily life. All sorts of theories and medical treatments were tried but all failed. A pivotal moment came with an appointment with a surgeon, who, as we sat there together in the office, gently asked, “How’s school?” and the response was the same I had heard for many months. With a shrug of her shoulders she said, “I hate it.” Instead of dismissing this comment as something ALL teenagers say, this wise Doctor asked, “Does it make you anxious?” As soon as she said that word, I KNEW in my heart, that this is what we were dealing with. I didn’t even care that the answer to this question was “No, not really.” An exchange of knowing looks between the doctor and I settled my heart and confirmed what I had already been thinking. I carefully declined the offer of surgery to investigate what was happening in the belly of my girl and began looking for someone to help her with the pain in her soul.

My heart ached. My mind got to work. My spirit prayed.

Her soul ached. Her mind stopped working. Her spirit darkened.

The weeks of counselling amounted to little. Nothing shifted.

Medication was suggested and offered. It was embraced and accepted by my girl yet I knew it wasn’t the answer.

The highs of the first week were euphoric – the lows of the second week proved almost fatal.

I recall looking into her beautiful eyes and seeing nothing.

I knew we were on dangerous ground. The pull of death had lingered long enough to disguise itself as the answer and the only option.

My Mama’s heart broke as I watched her slipping away. There seemed to be nothing I could do, no words that would ease the pain and emptiness she was feeling. No hugs, no affirmations, no “You’re going to be okay babe” would suffice. It was truly painful for me as I realised I no longer had the ability to say, “Trust me, I know you’ll get through this.” I no longer had a say.

The week leading up to Friday 19 August, 2011 was filled with such an urgency that I rallied people to pray. I prayed like I’ve never prayed before, constantly, never-ending. Something was happening and the evil seemed to be closer than ever. I could feel it, I could sense it. I needed to push it back.

By 4pm Friday, we had managed to get to her psychologist and within 5 minutes, she had left the room to find me.

The world fell out from underneath me. She’s got a plan. My daughter has a plan to end her life. How does a Mum hear that and know how to process it? I knew she was in a very dire place but to know she had an actual plan laid out was a new level of helplessness for me. Her plan was supposed to be executed the evening before but my husband Matt had unknowingly thwarted it. My heart ached more than it had ever ached before. Looking in her eyes, as my girl was forced to tell me about the plan I didn’t recognise her. She was not even a shadow of who she had been before.

There was no light.

There was nothing there.

I was numb. We didn’t go home from the psychologist appointment. We went straight to the hospital. Terror and panic barged their way into my world again as we left the office. Was she going to jump from the car while we drove? Would I be able to get her there in time so that she would be safe? Why wasn’t she safe? What have I done wrong?

Hours and hours passed, filled with psychiatrists, rooms emptied of everything, waiting, no information provided, and red-tape ridiculousness at the children’s hospital.

She lay her head in my lap and I stroked her hair like I had every time her head reached my lap.

A whispered promise of “He’s got the night watch” reached my phone, a message from a dear friend. This promise reached my heart and I clung to it with all of my might.

What was the cause of this?

How did we get here?

What do we do now?

We were required to admit Madison to the Acute Adolescent Unit to be on suicide watch. Papers were filled in and with the stroke of a pen we signed our daughter away into the care of the medical world.

Will we get her back?

Do we still get to have a say in her life?

Does this mean she’s in their care forever?

When the dust settled and she was safe in a lock down facility, Matt and I stood outside, in the rain, held each other and sobbed. How did we get here? What on earth just happened? We prayed through gasps of air that God would keep her protected and safe.

Guilt and disappointment in myself made me feel like a failure. I had always thought I would ruin my children and here we were putting our daughter in a nut-house. It was my fault.

“He’s got the night watch.” My only source of comfort.

The following days turned into weeks and then a month before she was discharged from the facility. Each one of those days revealed to me that He truly does have the night watch.

But fear did try to befriend me many times once Madison had been released from the care of the hospital. Her first three nights of being home, I was woken at 3am with a soft voice saying, “You’d better go and check on her. She’s left you know. She’s gone to do it. You’d better go and check.” In my sleepy, foggy state of mind, I recall being as sharp and wide awake as ever as I said, “I don’t care if you wake me up every night for the rest of my life, I will not check on her. My God has promised He has the night watch.” I rolled over and went back to sleep. I was not going to give in to the fear.

The fight for Madison’s complete healing continued for another year and a half and it was definitely a bumpy ride. However, I now knew what I was fighting. I knew my daughter and my family were worth the fight. Fear no longer resided in my heart and fierceness and immovability became who I was indeed, who I still am.

“Though I walk through the valley of the shadow of death, I will fear no evil, for you are with me.” Psalm 23:4

God is faithful to His promises. During the pendulum swings between her craving death to the longings for life in all its fullness I filled my days with Gods word, songs of hope and promises for my girl. Four years later they still feed my heart and mind and anchor my soul.

Previous PostGifts Infused With Tenderness Towards Grief – The Laurelbox Story